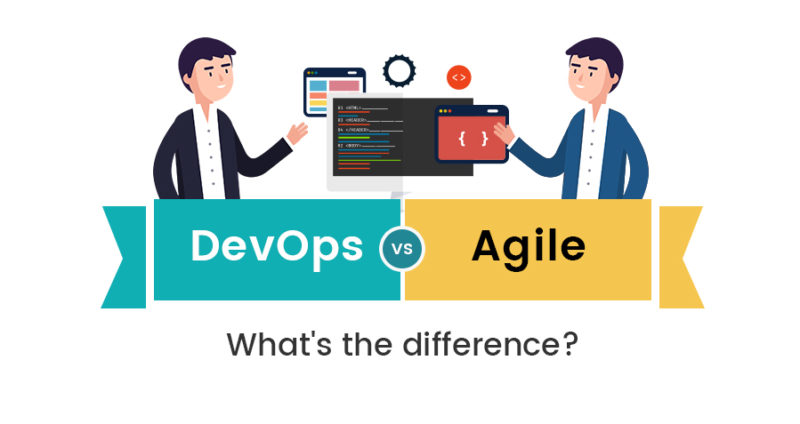 Most of the companies worldwide had already shifted their software delivery paradigms from Waterfall to Agile. Many try to undergo the complete digital transformation in the process and adopt DevOps practices also. However, most businesses cannot tell the difference between Agile and DevOps, and think these are either interchangeable or complimentary. This is quite far from the truth, and as IT Svit is an experienced DevOps services provider devops services, today we will compare Agile vs DevOps to clear this out.

When comparing DevOps vs Agile, one must understand that it is actually a comparison of potatoes and apples. Both are useful, but one is a vegetable, and one is a fruit. The same discrepancies exist between Agile and DevOps, as these are two quite different things.

Agile is a methodology of software development concentrating on code delivery in short sprints, readiness for  flexibility of project requirements and characterized by the “fail fast, learn fast” attitude. Agile was proposed as a replacement for Waterfall model, which had strict time frames, rigid roadmap and milestones.

Agile methodology accepts the adjustability of project specs as a matter of fact and actually plans for them in advance. The only ever-present requirement is that the product is operational at the end of each sprint. Some features might be moved to backlog, some might be discontinued after some time in development — but the product remains operational and gets incrementally better over time.

Thus said, Agile provides the tools to plan for changes and helps avoid the disaster — and anyone working under Waterfall model knows that trying to add a new feature mid-development is a disaster there. Just unlike it, Agile model keeps the products modular, so they can be easily improved according to the updated customer’s requirements.

The phrase “fail fast, learn fast” means that experimentation is more preferable than stability of operations, and ideas should be tried out regularly. The methodology suggests failures will happen quite often, but they will be the source of useful experience and serve to further betterment of the product.

DevOps is a methodology of IT operations concentrating on automation of routine operations to minimize the human effort involved in repetitive low-value tasks. It actually is built upon Agile principles and emphasizes using 3 main principles: IaC, CI and CD to ensure both the software development and the IT infrastructure management are cost-efficient, predictable and require much less time and effort to achieve good results.

Conclusions: DevOps and Agile are two sides of the same coin

As you can see, there is an essential difference between Agile and DevOps The first is the theoretical concept of software delivery process organization, while the latter is the practical implementation of the practices and workflows that make Agile possible.