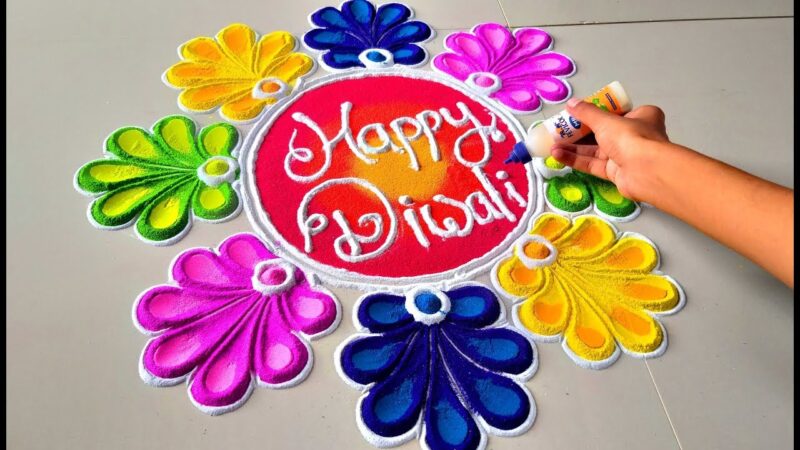 Rangoli is a folk art of India. Patterns of colored rice, dry flour, colored sand, or flower petals are created on the floor of living rooms or courtyards. This is usually done during Indian festivals. They are intended to mark sacred places of greeting to the Hindu deities. The patterns of ancient symbols have been passed down through the centuries from generation to generation, preserving both the artistic form and tradition.

What you should know about rangoli

Rangoli is the application of ornamentation to the exterior walls of a house – especially around the front door – and to the carefully cleared and tamped area in front of the entrance to the house. The types of these designs vary among the different peoples of India, with many going back to the deepest antiquity, to those historical epochs when they were ascribed magical significance and were applied on the ground near altars and places of sacrifice. It is possible to trace a direct connection of some of them with the patterns on the seals and vessels found during the excavations in the Indus valley.

At dawn, when the men were still asleep, women scooped up paint (usually powder paint) in a handful and dribbled it between their fingers in narrow streams. With elusive movements of the hand, they quickly and unmistakably drew a delicate and complex ornament on the floor and on the ground. Sometimes it is one-color, but more often two and three-color, and it takes great skill to clasp the fingers in time, overlapping, where necessary, the trickles of paint. You can even find out how to get rangoli stamp in google pay, so you should understand that this kind of painting is currently very popular all over the world.

Now in the cities began to sell hollow tubes with holes, arranged in a certain order. Sellers pour paint powder into them and roll them on the asphalt. The patterns are lacy, but they are all stripes, whereas real traditional alpona consist of an intricate interweaving of lines in a square, a circle, a star, or any other outline. Tibetan monks use a similar technique to create sand mandalas.

Rangoli is more than just art, it is a traditional prayer, a certain mystery and a reverent process of creating colorful and colorful ornamental drawings out of flowers, rice and rice flour. The art of drawing rangoli is an extremely painstaking and time-consuming work. It should begin with creating a base, which is usually made of sand, marble dust, sawdust, and crumbled bricks. Then the patterns are carefully filled in, mainly with rice flour and colored chalk, and decorated with grains, beads or flowers on top. It is important that there are no broken lines in the rangoli pattern to avoid triggering evil spirits.

The themes and patterns of Rangoli are very diverse: heavenly symbols – the sun, moon, stars, natural elements – flowers (lotus is especially popular), trees, birds, animals, fish; they also depict human figures and geometric elements – circles and semicircles, triangles, squares and rectangles. The arbitrary form is not limited to any canon, but there is a basic understanding of the look of these ornaments.